New Insights into Prevalence of Alzheimer's in Older Women

Angela Wang
Edited by Katyana Nguyen
January 9 2018
Current Research
Alzheimer's disease is a progressive disease that currently affects the lives of over five million Americans and their caregivers. It is characterized by a slow decline in function, starting with memory and eventually affecting basic physical abilities as the disease worsens. There is currently no known cure for Alzheimer’s. A curious phenomenon that researchers are trying to explore is the fact that women make up two-thirds of all Alzheimer’s patients today. A recent study conducted by scientists at Cornell University and the University of New York shed new light on some of the mechanisms behind this occurrence. Specifically, they made connections between stages of menopause and the progression of Alzheimer’s. Although this research was in the early stages, the scientists were able to figure out that women begin to be more vulnerable to developing Alzheimer’s in the time just before menopause.

Menopause is a hormonal change every woman goes through, but as new research has revealed, the decrease in estrogen that causes reproduction to stop also affects a woman’s brain, changing sleep patterns and moods. The root of these changes can be traced to the role of estrogen in the production of adenosine triphosphate (ATP), a chemical that the brain makes from glucose to use as a main source of energy. Estrogen promotes the production of ATP, but since women produce less estrogen during menopause, they also produce less ATP. This can cause a woman’s brain to have lower amounts energy, leading  to a buildup of amyloid-beta, a key factor in Alzheimer’s disease. To determine how ATP production in the brain changed, researchers looked at the activity of a protein called cytochrome oxidase (COX), which is a crucial component of the ATP synthesis process. If COX activity were low, that would mean that ATP production and energy were low, leading to the increase of amyloid-beta. 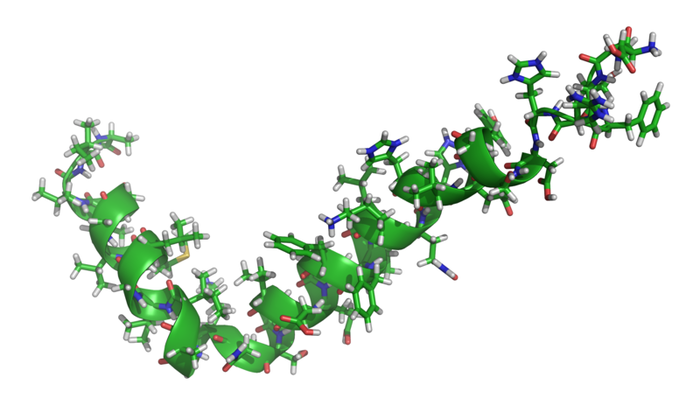 3D Model of amyloid-beta, which can accumulate and cause Alzheimer’s disease to develop.
Image Source: Ayacop
To carry out their experiments, the scientists involved with the study recruited various women in different stages of menopause as well as other women who had yet to enter menopause. The women received a variety of tests to determine their COX levels and mental ability, including tests of mental processing and blood tests. The blood tests showed that the further a woman’s estrogen levels dropped, the lower their ATP production became. The women with lower estrogen levels also did worse on memory and association tests.

The results of this study may be worrying, but it is important to remember that this study was an initial exploration into the relationship between menopause and Alzheimer’s disease, and that further exploration and inquiry by the researchers will only clarify the relationship between the two. As scientists learn more about these connections, they would be able to better develop treatments and medications that will serve to decrease the risks that women face as they age.
​Featured Image Source: "CT Scan" by Akira Ohgaki is licensed under CC BY 2.0